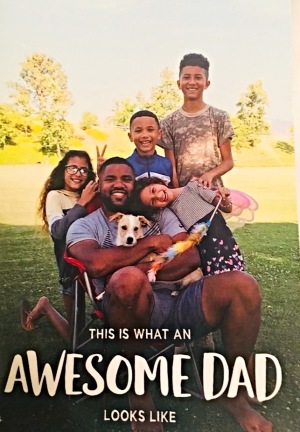 A beautiful baby boy, he was born on an equally beautiful, cold and crisp winter’s day on January 4, 1980 at the Alaska Native Medical Center in Anchorage, Alaska where his father was a United States Public Health Service physician.

He is survived by his loving wife Leza and their five amazing children, Jared(J.J.), Scarlett, Jackson, Soleil and newborn Azelle.  He leaves behind his beloved parents, John and Jocelyn Bocachica as well as the rest of his much loved and treasured “Wolfpack”, older brother Juan and his younger brother, Javier.

Unabashedly unafraid and never shying away from being his own man, Jared took life by the horns and lived every second of every minute of every hour of every day to the fullest, savoring the journey as much as the destination.

As a young child, he announced to his mother “You are not the boss of me!” and while he of course was chagrined to find that indeed she was, it spoke to his early determination to do things his way.

As a toddler playing with Dominick, a neighbor boy, his friend asked to play with the toy Jared was playing with. When Jared declined to let his have the toy, the other boy threatened to not be his friend anymore. Upon hearing that, Jared took back the other toy that his friend had been playing with and continued to play by himself, oblivious as to whether the other boy joined him or not; another indicator of his lifelong quest to do things his way.

Enjoying a wonderful childhood with his brothers in Juneau, Alaska where they could always be found in their clubhouse in the woods; he developed an early appreciation of the beauty of his natural surroundings and the amazing wildlife was never more than a stone’s throw away. From the eagles that soared overhead to the bears that would appear at his house  to the plentiful salmon in their annual river runs, Jared was always respectful of and fascinated by the life around him. This early appreciation would serve him well when his life’s journey would take him away from such natural surroundings.

A bright student, Jared went to Esperanza High School in Yorba Linda, California and obtained his Bachelor’s degree in Business Administration at the State University of California in Monterey, California. At times difficult to define,  Jared’s work always involved pushing himself as hard as he could in any endeavor he chose to undertake. Business partners and co-workers quickly recognized his razor-sharp acumen and incredibly innovative mind set and instinctively knew they had someone special in their midst.

From his handsome demeanor to his enticing smile, to know Jared was to invite the best that life had to offer.

Whether at a family gathering with his in-laws in California or visiting his parents in Alaska or kicking it with his brothers, Jared was never at a loss for injecting humor into any situation. From the hapless server who after reciting a lengthy list of specials was interrupted by Jared saying “What was that you said”  to his always-at-hand funny stories, he made everyone laugh, even in the most serious of situations.

Incredibly well-read, informed and opinionated, Jared could be a triple threat to those not so gifted yet he only strived to make everyone around him comfortable in his presence.

He lived his life as an example to his family that he loved so much; using family forays in his newly adopted state of Utah to teach his children to appreciate the history and beauty of their surroundings

And while loving hunting, he always taught his children to respect nature and never take it for granted.

Much like his dear mother whom he was so close to and  resembled in appearance and temperament, Jared was fearless, swimming among signs clearly stating “No swimming allowed”; hiking with her or others into areas clearly marked “No trespassing” and never backing down from a challenge, he always stood for what he believed in and was not afraid to defend it.

Lastly, his amazing wife Leza, the love of his life and his treasured children always knew what others would slowly discover, that no matter how tough this man’s man was, he died with a heart well-worn and well-used.

He leaves behind a world with one less bright light and loved ones who will miss him beyond what mere words can possibly express.

In lieu of flowers please consider contributing to Leza Bocachica’s GoFundMe page as it is truly needed. Thank you so much.

A service summary is not available
Share a memory
© 2020 McMillan Mortuary. All Rights Reserved. Funeral Home website by CFS & TA