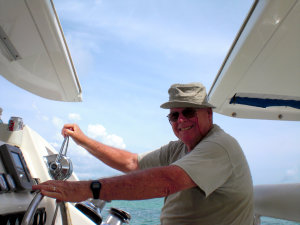 He was born on April 30, 1936 to Wilson L. and Katherine Haggerty Slocum, in Stockbridge, Michigan and joined his sister Edith, who was six years older. He attended schools in Jackson, Michigan and graduated from Jackson High in 1954.

After graduating high school, he attended one year of junior college and then received a full Navy scholarship to the University of Idaho.  While at Idaho, he joined the Phi Delta Theta Fraternity and worked at the Nest, the local campus hangout.

He graduated from the University in 1959, with a B.S. in Psychology and Naval Science and immediately married his college sweetheart, Janice Elaine Berg on June 8, 1959 in Richland, Washington. They packed up their old Dodge car (The Turtle) and headed for Pensacola, Florida where Bill began his Navy flight training.  He chose to fly helicopters and was assigned to HS-4 in San Diego, California.  He was deployed on two, eight month cruises aboard the USS Yorktown in the Pacific and his wife was lucky enough to quit teaching and follow his ship around for six months.

Bill left the Navy in 1964 and became a stockbroker for E.F. Hutton at Universal Studios, California.  He dined quite frequently with the Munsters in full makeup.  Selling was not Bill’s cup of tea so shortly thereafter, Bill’s buddy told him how wonderful United Airlines was and convinced him to change careers.  What a blessing that was!  Denver was the next stop for flight training, on to Chicago for a year, and then the family settled in San Jose, California.

In 1974, Bill was baptized into the Church of Jesus Christ of Latter-day Saints and sealed to his family in the Oakland temple in 1975.  Bill enjoyed many church callings, some of his favorites were Branch President, High Counselor, Bishop, and Missionary.  Bill really enjoyed genealogy and even before joining the church, he was actively involved in it.  He ultimately became the Director of the Oakland Family History Center and it’s Chief IT man.

The family lived in San Jose until 1980, when Bill got the itch to farm.  Off they went to the small town of Williams, California, where they bought 30 acres of walnut trees and became farmers.  Bill commuted from the farm to the San Francisco airport until they moved to the city, in 1991.

Sailing was a huge part of Bill and his families life.  He cherished the time spent with his family, sailing in the San Francisco Bay and renting boats for family trips.  One of the highlights of his life was celebrating his 50th wedding anniversary with his kids, grandkids, and extended family in the Abaco, Bahamas.  After 31 years with United Airlines, he retired as a 747 Captain and promptly full filled his dream to sail around the world by buying a 42 foot sail boat, aptly named Dream.  Many of his friends and family had the joy of accompanying him on his numerous adventures.

After their sailing adventures, Bill and Jan were called to serve as Missionaries to the Family History Center in Salt Lake City, Utah, where they served for two years.  Upon completing their mission, they moved to Walnut Creek.  This put him closer to his grandchildren which full filled another dream.  He bought an RV, named Mitch (from Michigan) and spent many a summer camping around the states with the grandkids.

Bill was full of life and compassion, always willing to help another when needed.  His sense of humor  was priceless and only exceeded by his laugh.

This service will be available to watch via Zoom, the information is below

To send sympathy gifts to the family or plant a tree in memory of Bill Slocum, please visit our tribute store.