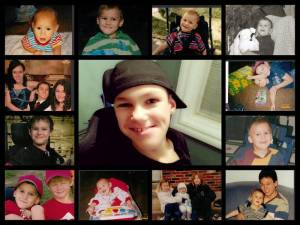 Calvin Oren Brooks Harada, age 24 passed away on Sept. 1st 2021 in Washington, Utah. Calvin was born in St. George, Utah July 12th 1997 to Ronald Alan Brooks and Marlene Cox Brooks.  He joined a family with two sisters, Nicole and Jenifer. The divorce of his parents came shortly after his birth.

At about 18 months old, Marlene met and later married Shane Harada, which also brought a step-sister, Mikayla.  Calvin moved to and lived in Missouri for 4 years where he started elementary school.  These years were very happy for Calvin as he continued to grow.  He was joined by another brother, Cameron and a sister, Courtney during these years.  A short two years in Hurricane, Utah was the next place of residence.  Two additional brothers joined the family while here, Justyn and Wyatt.  The family moved to Kooskia, Idaho at the end of 2005.  These years in Idaho were the most memorable and enjoyable for Calvin.  He fell in love with Idaho and Boise State Broncos.  He always wanted to move back.

The Family moved to Eagle Mountain, Utah in 2016 so Calvin could be closer to doctors at Primary Children’s Hospital that did their best to help him.  Each year seemed to bring more decline.  Each hospital visit included various surgeries, many medical interventions and was followed by significant decreases in health status.  Earlier this year, in July, Calvin moved with his family to Washington Utah.  Ten days after moving he was admitted to the hospital and was later transferred to Primary Children’s Hospital.  The signs and symptoms showed that his body was shutting down.  Calvin’s last day in mortality was Sept. 1st 2021 where he peacefully joined the angels from his home. He left a huge hole in our hearts and life that will never be filled.

ALL ARE WELCOME TO ATTEND.

To send flowers to the family or plant a tree in memory of Calvin Oren Brooks Harada, please visit our floral store.