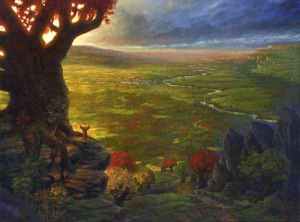 New York Times Best Selling Author David Wolverton, AKA; David Farland, passed away on January 14, 2022 at the age of 64.

John David Wolverton was born May 28, 1957, to Jack and Lola Jean Wolverton, in Springfield, OR. When he was six years old, his family moved to Monroe, OR, where he grew up working on the family farm, raising animals, and exploring the country. From an early age he dreamed of becoming a storyteller, and he wrote stories, his imagination filled with magic and wonder.  At age 15, Dave was baptized a member of The Church of Jesus Christ of Latter-Day Saints, and after graduating from Monroe High School he served a 2-year church mission in Chicago, IL.

Afterward, he entered Ricks College in Rexburg, ID and later transferred to Brigham Young University, originally studying Premed. By 1984, he changed career paths and decided to become a writer, winning several short story competitions. At this time, he met Mary Christensen, the love of his life, and they were married in the Provo, UT temple on June 22nd, 1985. Their first daughter, Lola, was born exactly 9 months and one day later.

In 1987, Dave won the grand prize in the prestigious Writers of the Future Contest for his exceptional short story “On My Way to Paradise,” which he expanded into an equally exceptional novel, published by Bantam Books, which spent several months on the Locus bestseller list and won a Philip K. Dick Memorial Special Award. He wrote several other bestselling SF novels under the name Dave Wolverton, including the New York Times bestseller, Star Wars: The Courtship of Princess Leia. In 1994, he changed his pen name to David Farland and launched his imaginative Runelords series, which also became a New York Times bestseller and attracted a new generation of readers. For decades, Dave continued to publish works that received accolade upon accolade. He also worked in the video game and film industry, contributing to major franchises such as “Star Craft: Brood Wars” and greenlighting scripts in Hollywood.

Dave was not only an amazing writer, but also a tireless teacher and mentor. He spent countless hours teaching hundreds of workshops and master classes, presenting on panels for conferences and conventions all over the world, editing the work of hundreds (if not thousands) of other writers. From 1999-2002 Dave worked as an English professor at BYU. Dave served as the Coordinating Judge for the Writers of the Future Contest from 1991 until his passing.  He co-founded the Superstars Writing Seminar and created the Apex Writers Group. Dave directly had a hand in the careers of many of the most well-known fiction writers of our times, including Brandon Sanderson, Brandon Mull, Jessica Day George, Eric Flint, James Dashner, Stephenie Meyer, and countless others.

Dave never got jealous of the success others achieved, but instead cheered them on to higher levels. Nor did he let his own success go to his head. His greatest joy was in helping others to see their potential, reach for new heights, and live their dreams, just as he himself had done. Dave saw a friend in everyone and generously devoted his life to any who happened upon his path.

Always by his side was his wife, Mary. Dave provided the perfect example of patience, commitment, and unconditional love. He held his wife’s hand whenever she was near and showered her with affection. They were well known around their neighborhood for taking walks together every night.  Together they raised 5 children. Few mornings did not begin with Dave walking down the stairs and singing in his sweet tenor voice “Good morning sunshine, how are you today?” which was followed by a warm embrace. When his children were young, he would wrestle with them on the floor or recite one of his adventurous bedtime stories. He was always quick with a joke or story to one-up your own story. Dave took special care of each of his children, providing them with love and encouragement, helping them be their best selves with his words of wisdom and keen insights.

While Dave loved his children, his greatest joy in later years were his grandchildren, his smile never bigger than when he was holding each one, singing songs, blowing raspberries, or tickling them until they burst with smiles and laughter. He was seen as a gentle giant, often mistaken as Santa Claus. When he walked into the room, the older grandchildren flocked to see what present or candy he had brought them.

Dave was an extraordinary individual, a kind soul, and a cherished friend by all who knew him. Generous with his time, advice—even willing to give the clothes off his back. He left anyone better than he found them. In the last years of his life, he traveled several times to the island of Fiji, where he had cultivated a special love for the people and the land, and he provided charity to families there in hopes of easing the hardship the island is going through.

Dave loved long walks and hikes, going to the gym, Diet Mountain Dew, spending time with his grandchildren, Star Wars, Lord of the Rings, wildflowers, all types of music, Dungeons and Dragons, teaching, and flat caps.

He is preceded in death by his parents Jack and Lola Jean Wolverton.

The Wolverton family would like to express our appreciation for the outpouring of love and support after the passing of our father. Hearing so many stories of mentorship, love, camaraderie, and creativity is both humbling and comforting to us. The love the community has shown uplifts us and lets us know that his loss is keenly felt not only by his close family, but by the multitude of lives that he touched.

The funeral service will also be streamed live at  https://www.facebook.com/DavidFarlandEntertainment

Interment at the Tonaquint Cemetery immediately following the funeral service.

To send flowers to the family or plant a tree in memory of David Wolverton, please visit our floral store.

A Memorial Tree was planted for David

Join in honoring their life - plant a memorial tree