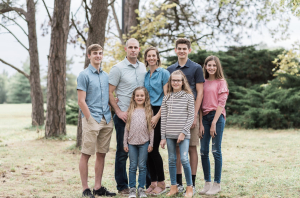 Our sweet Jalen Samuel Melessa returned home to his Heavenly Father on February 6, 2021. He was born into this world on February 14, 2003, in St. George, Utah to Samuel Joseph and Cherin Donna (Reber) Melessa.

Jalen spent his early childhood years (to age four) in Washington, St. George, and Salt Lake City, Utah. His family then moved to Durham, North Carolina for graduate school. There, Jalen developed a love for Duke University. Jalen loved Duke basketball, and he planned to go to graduate or medical school at Duke. While in North Carolina, Jalen began developing his many talents – reading many books, learning the piano, drawing, and playing basketball and baseball. At age nine his family moved to Iowa, the place Jalen would come to call his home. Many of Jalen’s fondest memories were in Iowa, participating in church activities with the young men and leaders of the Iowa City 1st Ward, playing basketball, and spending time with close friends and family. At age 16, Jalen and his family moved to Nebraska where they shared some wonderful times together; these will always be cherished.

Jalen planned to continue his education at Brigham Young University in Provo, Utah (where he was recently admitted). Jalen also desired to serve a full-time mission for The Church of Jesus Christ of Latter-day Saints. Although Jalen was unable to serve a mission here in mortality, we are certain he is working to gather Israel on the other side of the veil, and preparing the way for our eternal family.

Jalen was very intelligent and had a deep love for learning. He spent many hours on his own learning subjects such as differential, integral, and multivariable calculus – he earned a four-year full-tuition scholarship to the University of Nebraska. Jalen was also an exceptional athlete and loved exercising and taking care of his body. He had a passion for basketball and spent countless hours working on his game – some of his most cherished memories were on the basketball court with family and friends.

Most importantly, Jalen had a strong testimony of the gospel of Jesus Christ. He was a worthy priesthood holder who fulfilled his priesthood responsibilities. He was very close to his parents and siblings, and he loved spending time with his grandparents, aunts and uncles, and cousins. Jalen loved others as the Savior would, reaching out to, lifting, and befriending those who needed it most.

Jalen is survived by his parents; his younger brother, constant companion, and best friend Christian; his younger sisters Brooklyn, Mariah, and Claire; his grandparents Keith and Stephanie Reber and Steve and Pat Melessa; and twenty-one aunts and uncles and their families.

As Jalen’s family, we express our deepest appreciation to all who love and care for Jalen. We extend our most sincere gratitude to the many neighbors, friends, ward members, and church leaders in Utah, North Carolina, Iowa, and Nebraska who showed Jalen genuine friendship and Christ-like love.

A service will also be held in St. George, Utah on Thursday, February 25, 2021 at 12:00pm, with a viewing from 10:30am to 11:30am, at the chapel of The Church of Jesus Christ of Latter-day Saints at 881 South River Road. Jalen will be laid to rest in the Washington City, Utah cemetery following this service.

The service in St. George, Utah will be Live Streamed from McMillanmortuary.com just under Jalen's obituary.

Following CDC/COVID-19 guidelines, we ask that those attending the service in person wear masks.

Memorials may be directed towards Evidence Action’s “Dispensers For Safe Water” initiative, a cause that Jalen contributed to and supported: https://www.evidenceaction.org/dispensersforsafewater/.

To send flowers to the family or plant a tree in memory of Jalen Samuel Melessa, please visit our floral store.