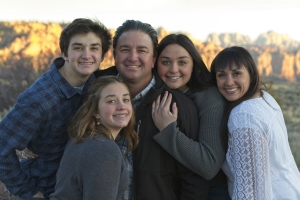 Jesse Rodriguez Kochel, 46, tragically passed away on April 8, 2021 in Hurricane, Utah due to complications while battling Stage 4 Glioblastoma, an aggressive form of Brain Cancer. He was diagnosed February 14, 2021. Jesse’s short 7 week battle with cancer was fought with admirable strength and unwavering determination, just as he lived his life. Jesse was born June 7, 1974, on his Mother’s Birthday to Roger and Melani Kochel in Cottage Grove, Oregon. Jesse had the privilege of also being raised by Norman Guith from the age of 2.

Jesse was raised in Alta Loma, California and attended Carnelian Elementary, Alta Loma Junior High and graduated Alta Loma High School, Class of 1992. Jesse had a love of the water and enjoyed weekends and summers at the family home on the Colorado River, jet ski racing with his Dad, Norman and participating in water polo and swimming during High School. During his time playing water polo for the Alta Loma Braves, Jesse was two time CIF champion. He spent many weekends racing jet ski’s at Long Beach Marine Stadium and Lake Havasu where he made many friends and enjoyed the competition of racing. He was proud to have been a competitor at the IJSBA World Finals in Lake Havasu City, AZ in 1991.

After high school, Jesse served a mission for The Church of Jesus Christ of Latter Day Saints in the Dominican Republic, Santo Domingo West Mission from July 14, 1993 to June 30, 1995. After his mission he lived in Borrego Springs and worked for his Grandparents at De Anza Ready Mix where he earned his CDL before moving to Novato, CA. Again, Jesse made lifelong friends in Borrego and enjoyed working outdoors. While in Northern California, he earned his contractors license and worked with his Dad, Roger doing custom home remodels in the Bay Area. In February 1999, Jesse met the sparkle of his life, Audra and the rest is history. Jesse and Audra were married in Borrego Springs, CA at the Rodriguez Family Home on November 11, 2000.

Their first child Ethan was born in 2002, followed by Savannah in 2004 and Mollie in 2008. In 2005, Jesse and Audra moved to Hurricane, UT to raise their family. Jesse and Audra’s work ethic and entrepreneurial drive led them to start Kochel Construction and later own and operate Landtek Landscape Services. Jesse proudly served his Landtek customers up until the day of his terminal diagnosis.

Jesse & Audra founded Southern Utah Water Polo with their oldest children, Ethan & Savannah in 2013. They wanted to share the love of the sport that impacted his youth. SUWP slowly gained momentum through Jesse ability to make friends and influence people anywhere he went. Jesse saw potential in any and every athlete and consistently reminded those young athletes “The only thing you can control is your attitude and effort.” Jesse was always finding ways to expose his children and the SUWP athletes to training opportunities, tournaments and exposure to high level coaches and players. Jesse coached for USA Water Polo Mountain Zone Olympic Development Program the past three years. He enjoyed giving “his kids” the opportunity to participate in Junior Olympics and tournaments all over the western United States. In addition to coaching, Jesse spent countless hours as a USA Water Polo referee and  never missed an opportunity to develop his skills and learn from many respected referees from around the country. Jesse was recognized by USA Water Polo with the following awards; 2016 ‘Barbara Kalbus distinguished volunteer’ and 2019 ‘Aaron Chaney Distinguished Referee’ award. His impact on the pool deck will be missed but never forgotten.

To send flowers to the family or plant a tree in memory of Jesse Rodriguez Kochel, please visit our floral store.