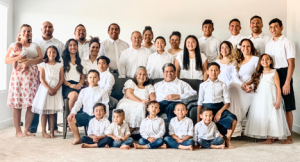 Leighton Kahaleonalani Kaonohi Sr., left this earth on January 12, 2021 in St. George, Utah.  He was born on November 20, 1952 in Honolulu, Hawaii to Gideon and Rita Kaonohi.  He married Beatrice Kealoha Makainai in Waimanalo, Oahu on November 1, 1975 and then Sealed for time and all Eternity in the Laie, Hawaii Temple in August of 1978.

He was raised in Waimanalo on the island of Oahu with his siblings Gideon Jr, Emogene, Godfrey and Paulette.  He attended Waimanalo Elementary/Intermediate and graduated from Kailua High School in 1970.  Was a member of the Church of Jesus Christ of Latter Day Saints in which he served many callings which he enjoyed very much.  In 1985, Leighton and his family bought a home in Kaneohe, HI where they lived in until 2007.  Upon their retirements they moved to St. George, UT.

Leighton loved sharing his love for his family and his community through music.  He was very well versed in many musical instruments including the Ukulele, piano, drums, guitar and the bass just to name a few.  He loved to sing, he was an entertainer before joining the HPD and played music in Waikiki at the Waikiki Beachcomber Hotel in the 1970’s.  In 1981 he became an officer with the Honolulu Police Department, 80th Recruit Class.  In 1988 while in the Police Department he created the Nationally known Anti-Drug Programs No Hope In Dope and Officer Honolulu. He took his program Nationally and Internationally sharing his message that there is “No Hope in Dope” and the messages of many others who supported his mission.  Through the success of both programs, Leighton was honored with many commendations, awards and notoriety by Local and National Law Enforcements, Government Agencies, Parade Magazine awarded Leighton as being one of the top 10 in Law Enforcement and he was also recognized by President Clinton at the White House. The NFL also played a big part in his anti-drug program No Hope in Dope and sponsored many of the community activities that were held.

Funeral Services will be held Saturday, January 23, 2021 at 2:00pm at the Morningside 1st Ward Chapel 879 S River Road St, St. George, Utah 84790.  Services are by invitation only due to Covid restrictions.

This service will be live streamed, click on the link below

Interment will be at Tonaquint Cemetery, under the direction of McMillan Mortuary 435-688-8880.

To send flowers to the family or plant a tree in memory of Leighton Kahaleonalani Kaonohi Sr., please visit our floral store.