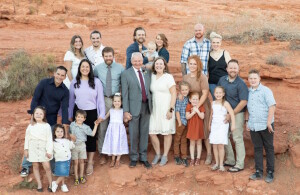 Lloyd Douglas Paxman was born on June 7, 1956 to the late Willard and Hazel Paxman in Raymond, Alberta Canada. He passed away on October 19, 2022. He was raised in Raymond, Alberta and grew up working on his family farm where he developed a strong work ethic and a love for the outdoors and farm work. He attended local schools and graduated from Raymond High School after which he served a 2-year mission for his church in Quebec, Canada. He was the sixth of nine children in his family. He is survived by his siblings Dixie (Glen) Svenson, Brenda (Ralph) Kunkel, Jim (Jolene) Paxman, Randy (Anita) Paxman, Reg (Linda) Paxman, Scott (Angelika) Paxman, John (Dixie) Paxman and preceded in death by his brother Gary (Kelly) Paxman.

Lloyd was a happy human. He spread laughter and love with his big smile and silly giggle (you know the one). He was loved by all who had the honor to know him. Some of his greatest joys were his 5 children. He will be fondly remembered and forever missed by his kids Timothy Lloyd Paxman, Mike (Lindsey) Paxman, Nicole (Jay) Chance, Joe Paxman and Sarah (Dusty) Oliverson. He was an exceptional Dad who taught his kids humor, how to work hard, how to serve others and the proper way to cry through a good movie. I think we can all agree that his real calling in life was to be a grandpa. He wore that title with obvious pride. His Grandkids never doubted his love. He always made time for them and if they ever needed a good belly laugh, a tight hug or a random stale candy from his pocket they knew who to call. He will be dearly missed by his Grandkids Olen, Sophie, Caleb and Charlotte Chance; Pierce, Max, Jimmy, Sawyer and Charlie Paxman and August Oliverson (with a baby brother on the way who no doubt Dad is snuggling right now).

Lloyd raised 5 kids with his wife Ginger in Raymond, Alberta. Eventually the family relocated to St. George, Utah where he worked in the propane industry until retirement. After retirement he decided to fill his time by driving school bus. He loved interacting and getting to know all the kids who had the good fortune of sharing time on the bus with him and the kids loved him in return. After several lonely years, he met his sweetheart Sheri who brought a new level of light, love and adventure to his life. With Sheri came her 4 kids Gerome Gali, Kristian Gali, Jenny (Joe) Furse, Aiano Gali Jr and her Grandkids Tessa Gali, Kloe and Avery Gali and Rosie and Dutch Furse.  Lloyd and Sheri dated and then were married on August 7, 2021 in St. George and sealed on February 19, 2022 in the Cedar City Temple. They enjoyed travelling, hiking and going on adventures together. Spending time together and visiting their kids and Grandkids was their favorite.  We are heartbroken that their time together was cut so short.  Sheri will forever be his always.  He is deeply missed.

Funeral service will be held Wednesday, October 26, 2022 at 10:30am at the Northbridge LDS Chapel, 1080 W. Arlington Street, Washington, Utah 84780. Services will be live-streamed with the below link.

Viewings will be Tuesday, October 25th from 6-8pm and Wednesday prior to services from 9:00-10:00am at the same location. Interment will be in the Washington Utah City Cemetery.

To send flowers to the family or plant a tree in memory of Lloyd Paxman, please visit our floral store.