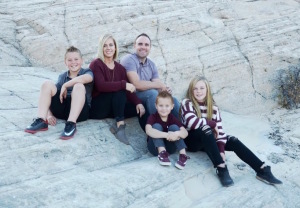 It is with deep sadness and heavy hearts that we announce the death of Wayne Sherrell Ott. He passed away in San Diego, California on July 8, 2021 as he was caught in a current while vacationing at the beach with his family.

Wayne was born on November 2, 1981 in Panguitch, Utah to Sherrell and Karen Cottam Ott.  He was the second of three children and spent his childhood and youth in Tropic, Utah.  As a child, Wayne loved being outside, playing with his dog Chubs, and spending time with his sisters.  His greatest joys involved his family, including his large extended family.  His grandparents were a constant presence and influence in his life, as were many aunts, uncles, and cousins.  Living in a small town provided Wayne the freedom to ride his bike all over town and enjoy hiking and fishing in the beauty of Bryce Canyon Country.  He explored the wide expanses of Southern Utah as he rode out on the range with his dad.  In 2000, Wayne graduated from Bryce Valley High School, where he developed close relationships with his peers and teachers.  He traveled around the state with his family and friends as the point guard on the BVHS Varsity Basketball Team.  He developed a love for numbers and served as student body president, excelled academically, and found his great love for basketball.

Growing up on a ranch, he learned the value of hard work. In his youth, he gained a simple faith and trust in God that became an anchor in his life. His love of God and Jesus Christ shaped the choices that he made and molded him into the good man he became. He served an honorable mission to Hong Kong, for the Church of Jesus Christ of Latter-day Saints, and loved the people he served. Wayne continued to build on that early foundation, culminating in his efforts with his wife, Danielle, to impart the gospel to their children through word and deed.

Wayne married the love of his life, Danielle DeMille of St. George, on September 17, 2005 in the St. George Temple. He adored Danielle, and loved to spend time hiking, working out, and traveling together. The highlights of his days were time spent with his wife, and their three children: Averie, Easton and Beckum.  Wayne was a devoted husband and father. There was nothing that he loved more than supporting his children in their sports- cheer, basketball, soccer, and football. Wayne continued his own love for basketball and played in a league with a great group of friends.  Together, Wayne and Danielle taught their children to be honest, upright, and faithful.  Wayne with his quiet strength and goodness, was a steadying presence to his family.

Wayne obtained a Master of Accounting degree from Southern Utah University and became a CPA. He worked for the Utah State Tax Commission in Salt Lake City, then worked for Piercy and Bowler Accounting in Las Vegas. He and his family returned to St. George where Wayne became a partner in the accounting firm Basile, Davis and Ott. Most recently, he enjoyed working for his good friend, Ben Moore, in asset and financial management.

He will forever be remembered for his contagious laugh and fun nature.  We will always remember Wayne’s kindness, his steadiness, his wise counsel, and integrity. He was a friend of all friends and a support to those around him.  Most of all, we will miss his physical presence in our lives. Wayne, we love you now and forever.

A funeral service to honor and remember Wayne will take place Saturday, July 17, 2021 at 11:00am at the LDS Stake Center, 1835 South Washington Fields Rd in Washington, Utah. The service will be live-streamed at mcmillanmortuary.com.  Viewings will be held on Friday, July 16 from 6:00 to 8:00 p.m. and Saturday, July 17 from 9:30-10:30 a.m. prior to the funeral services at the same location. Interment will be in the Washington Utah City Cemetery.

To send flowers to the family or plant a tree in memory of Wayne Sherrell Ott, please visit our floral store.